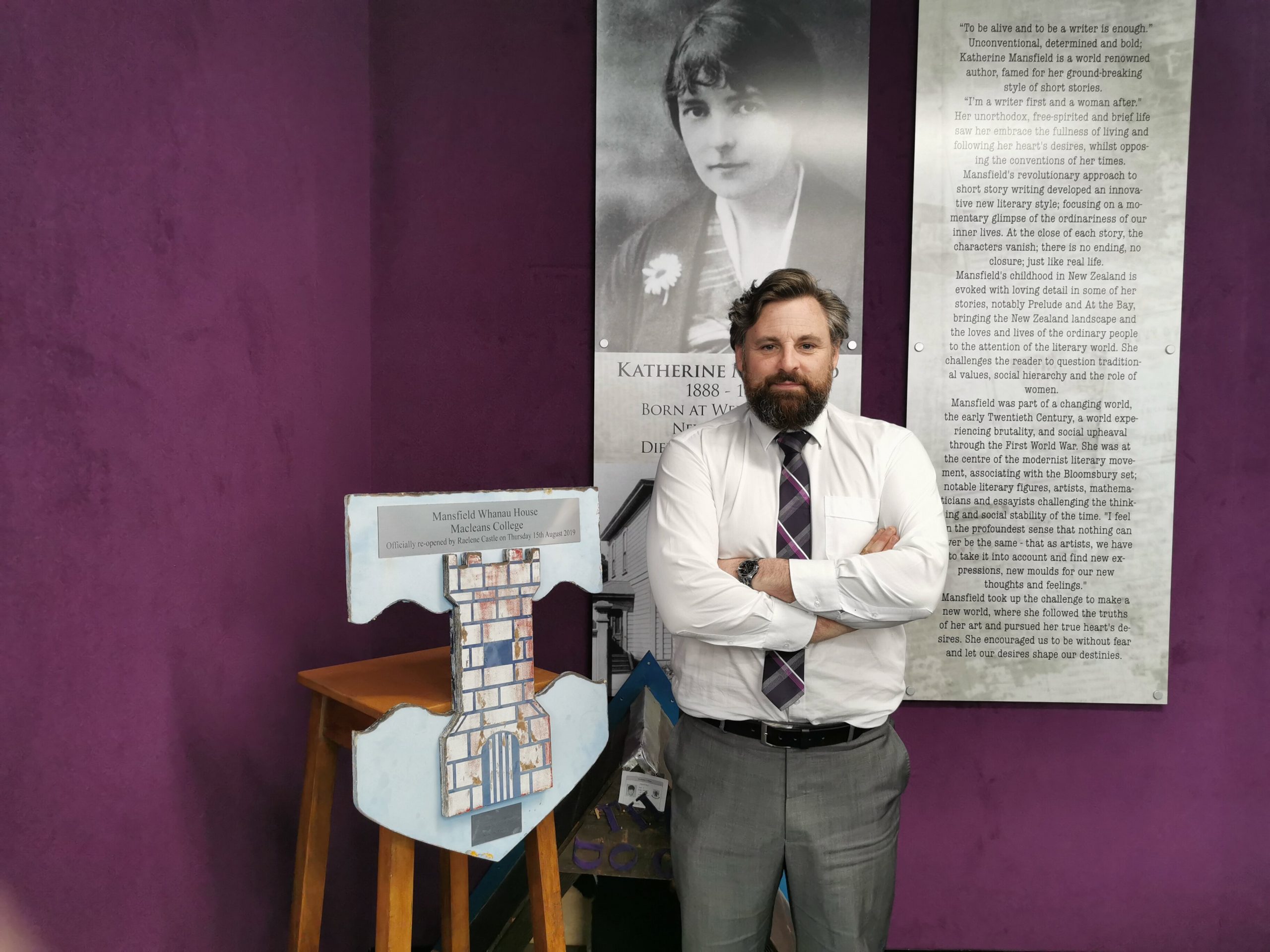 InterviewNews
Interview with the Purple Emperor: Mansfield’s House Leader Mr. Davidson
Mr. Davidson’s journey to House Leader and Head of Classics, his views on classical influences and the importance of building relationships.
September 17, 2020

Learn about Mr. Davidson’s brief stint as a clown to Head of Classical Studies and why he loves leading the fondly dubbed ‘Purple Castle’.

As a house leader, what quality or skill do you find most important?

There’s all sorts of things you could say. You could say that organisation and sort of chasing things down and stuff but ultimately to me it’s forming relationships with people. Getting to work with people, cooperating with people.

How do you build relationships?

It’s important to actually show an interest in what people have to say and things that we like to talk about and hopefully not making you into just a number. It’s a whole idea of making people feel valid in who they are and that they are important. Because everyone is important.

What do you pride about Mansfield house the most?

What I like about Mansfield is an inclusive atmosphere. To me it’s really important that people feel comfortable to be here and hang out here and enjoy being in their house and relating with the people around them. When they do that, they’ll support each other, they’ll help each other out and they’ll do the right thing. Not all the time, but the aim is that if it’s your house and your place and your people that you’ll do the right thing not because you’re being forced to but because it’s what you want to do.

Many students know you as the head of Classics. What sparked your interest in it?

I’ve been really interested in history and it ended up being classics. I think I process information and store information quite well. So, when it comes to things that are historical, I see them as what they are. I see them as interrelation of people, interrelation of events that make sense to me. The flow of it, the chronological advancement of these events and how they interrelate seems to stick in my head. So, Classics and History seemed like a normal option. But I find history is a bit more dull.

So what inspired you to specifically teach those?

Well, that’s exactly it—I enjoy them. They’re stories. They’re societal stories and they teach us something about where we are today. We could say that teachers say this garbage all the time but our western society comes from a specific design so it’s a place and a time. It builds. It’s built over time through connections to civilisations and ideas and all sorts of stuff and that’s where classics takes you. It’s a whole lot of exciting cultural stories which create the culture we’re in now.

Based on that idea that Western society is based on classical civilisations, do you think that there is perhaps one idea or philosophy that stayed constant from Greek and Roman times to Western society?

If we’re just talking from a Western perspective, ideas that the Greeks took and the Romans then used were sort of embedded in Western Europe. I know it’s not always been there but it’s always been an argument even though it was taken away, you had the ability to think almost what you wanted, and that allowed new ideas and expansion. The willingness to accept new ideas, something that the Greeks are very big on and the Romans took on as well, the whole idea that coming into contact with other cultures and other things is an opportunity to learn stuff and to better yourself. And whether that was always the culture to use to better itself to then conquer and murder everybody and steal their land is another matter, but in their minds, taking those ideas and using them freely without judging them has been the Westerners, has basically spread their culture around the world.

What made you want to teach Classics, instead of doing something else?

Okay, let’s be realistic here. I could have stayed at university, but it gets really expensive, and I went and lived overseas for half of my degree, and looked at going on to do my masters and stuff, but went overseas instead for eighteen months, and when I came back and said, yep, I need to actually do a job, I can’t afford to be a student any longer. But on top of that, I could have very much enjoyed sitting in an office, and reading and writing stuff about ancient history, but realistically what I enjoy is people, and so therefore teaching seemed more interesting.

What is something that students may not know about you?

What did you feel about the killer clowns?

Clowns are weird and freaky, don’t get more wrong, but it was a way of having fun and making money and doing new things. It’s fun, I enjoy it.

Is there a specific message or something you would like to say to the students of Macleans?

Just appreciate what you’ve got, and I’m not trying to sound like a Macleans College machine here, what I’m saying is go and look at other schools and see what they’ve got to offer and realise that things are actually good here, and I know that there are always problems in school because there are three and a half thousand people, but it’s a safe and secure environment and you can relax and be yourself, and it’s something that I have always admired about, you can relax and be yourself and find your group of people with very little fear that you are going to be tormented by somebody else because of what you believe or do. I know it happens, don’t get me wrong, it’s never going to be completely drilled out, but it is a nice, safe environment to be, who you want to be, and succeed in your area of expertise.

Interview conducted by Ermina Tajik and Louis Lee. Transcript published on 17/09/2020, with minor edits for concision and clarity. Header image supplied by The Collegian.