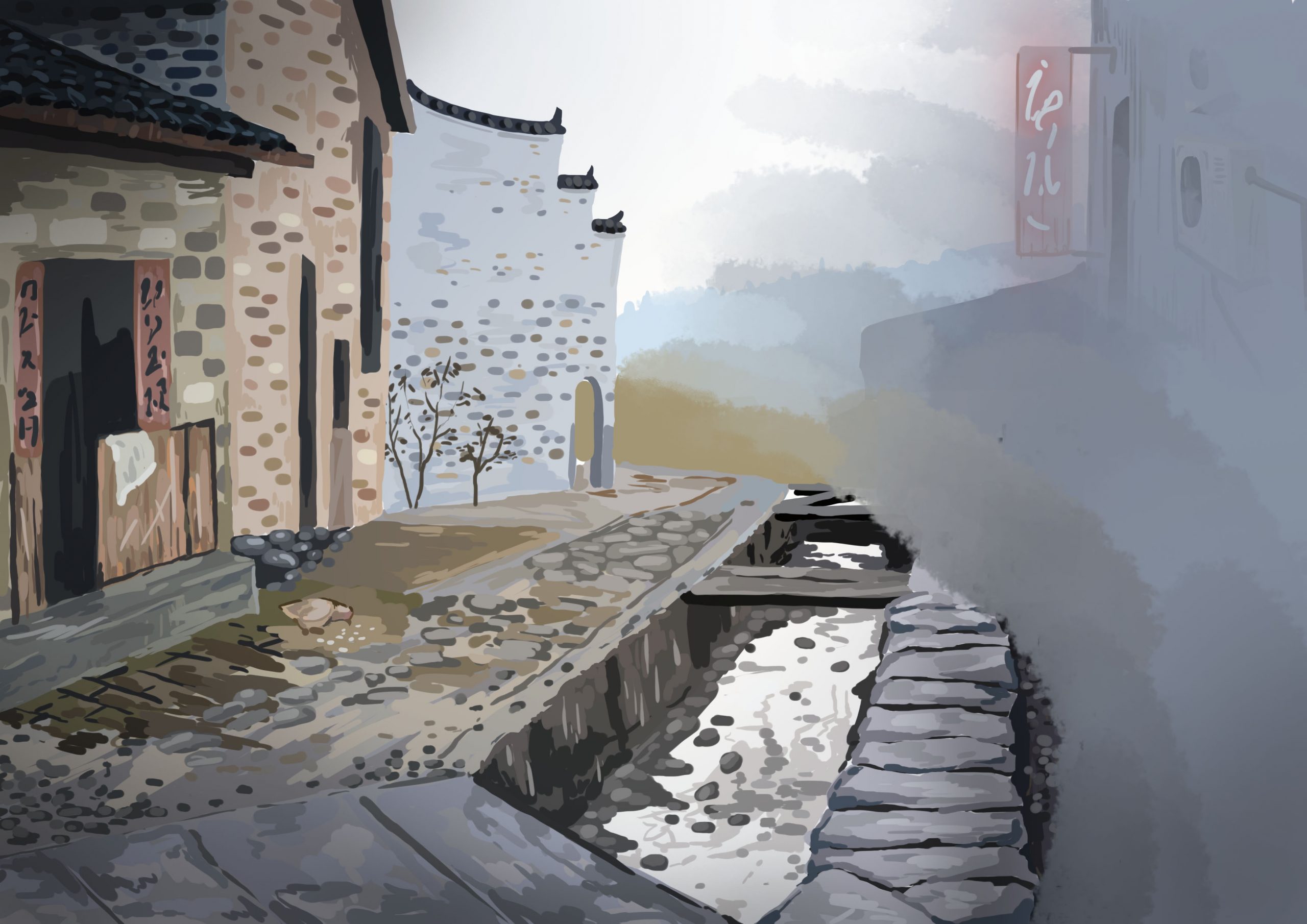 The smell. It comes from nowhere, no origin
For whether it was being or illusion,
Even metacognition offers no solution.
But even a whiff transports my soul,
To an alternate realm of this very world
Where every minute detail was ever so clear,
Clear for all but those who never cared.

A small stream, hills on one end, dams on the other,
Little and large bridges, old and new, striped across
Like a checkered pattern of grandma’s knitting,
Sit quietly, unplagued, withdrawing.
On that bank of the stream lie green hills and dirt mounds.
On this side, apartments and shops stand each to each,
In regular arrays of white walls and red roofs,
Too plain to be old, too stoic to be new,
A sojourn that has escaped time’s reach.
Between themselves, little alleyways,
Without the modern darkness led astray.
They’re the old, paved with stone and dirt,
Guarded by conglomerations of flats and houses,
And only a smelly gutter to separate their door and the road.
In most, however, there isn’t a gutter,
And sometimes you can see, through a light’s glimmer
A young student, sitting in a creaky bamboo chair,
Within their shaky and shaggy house of wood,
Feet flat on the ageless stone floor,
As the shimmer of blue light emerging from the slim plastic slab
Competes with the dim lamplight in the thin air.
If only I could live the same, without the necessity
To remind myself of its harmony.
But alas, I’m not her.
And ofttimes you might find her old grandmother,
Slowly, shakily closing the creaking doors without locks,
Turning, trotting slowly with arms behind her back,
A cough every ten steps, a spit into the gutter every hundred.
Until thousands of steps lead her to the park she visited a thousand times.
Someday, she might require assistance from her granddaughter,
But her journey wouldn’t be abruptly stopped,
Unlike those who cannot reach their grandparents,
Or those who can never escort their feeble hands,
Not even to the solemn end.
But, alas, the past has gone.

Yet whence doth I convince myself,
That unlike some youth inflamed with the necessity to be somewhere,
Unappreciative of the binding spell of man to homage of home,
Homage of age, and homage of nature, I can swing back,
Into the arms of the giant that guards the ancestral pillars?
For the old willow tree still stands, tall and strong,
Its roots extending hundreds of miles further than it did
Six hundred years ago when it grew from the cradle
Of war and prosperity. How admirable it is,
Being at peace with its people, its arms providing shade,
And where it grows frail, the people providing support.
Roads are paved and unpaved, but never once cut through
The timeless nature of nature’s infinitude in being,
Nor the betrayal and betrothal from man to identity.
Yet still the new path through the bamboo forest
Forms a gash through my heart, defamiliarizing the familiar,
Though as for what familiarises I, I shan’t know. It should lie
deep within the veins of time.
I have no need to play with its torturous temptation,
But, alas, it remains.

O, old willow tree, please answer me,
Why can you no longer breathe?
What I can only see,
There is no more worship for you, tree.
Was it by our own decree, that the peril was let free,
And we were tempted to tell ourselves we should no longer be?

But still the tongue tempts me. Smell has seduced me here,
And now Taste has stifled my being,
Trapped within the inescapability of the street side,
The sight of the misty steam emerging from the steamer
Like it was announcing the arrival of a dragon,
The chicken scrambling away at the sight of the bicycle,
Its dust cloaking the steam.
Such a tingle at heart, of sustenance that fulfils not my appetite
But my spiritual starvation in separation, beckoning me forward.

Could I not speak! Opened mouth, make out words,
Coarse hollowness! Gibberish!

Alas, a dream.
A pitiful chant, in fact. Hopeless rant.
Locked away, I cannot fly back to witness home’s hue.
But such a hopeful dream! For dreams can come true,
Unlike those who do not dream, who cannot feed
On the roots of fertility to imagine.
Too fearful to believe, for they could be judged for being.
Too unconfident to confide in,
The smell.